Happy Tuesday my lovelies, Following my recent dedication to post more often, here is another Tuesday book meme for you all. Top 10 Tuesday a meme created by The Broke & the Bookish, but which is now hosted by Jana from That Artsy Reader Girl featuring a different bookish related theme each week. This week’s theme is Bookstores or libraries I have always wanted to visit! I am so excited about this one because going to a bookstore is probably one of my favourite things to do! I just can’t help but feel at home there and there are so many amazing ones in the world I still haven’t visited (seriously debating planning a trip to visit a bunch of famous bookstores).

*All descriptions are taken from wikipedia

1. The Library of Congress

The Bodleian Library is the main research library of the University of Oxford, and is one of the oldest libraries in Europe. With over 12 million items, it is the second-largest library in Britain after the British Library.

3. Powell’s City of Books, Portland, OR

Powell’s City of Books, claims to be the largest independent new and used bookstore in the world and occupies a full city block. The City of Books has nine colour-coded rooms and over 3,500 different sections. The inventory for its retail and online sales is over four million new, used, rare, and out-of-print books.Powell’s buys around 3,000 used books a day.

Shakespeare and Company is the name of two independent English-language bookstores that have existed on Paris’s Left Bank. The first was opened by Sylvia Beach, an American, on 19 November 1919. During the 1920s, Beach’s shop was a gathering place for many then-aspiring writers such as Ezra Pound, Ernest Hemingway, Djuna Barnes, James Joyce and Ford Madox Ford. It closed in 1941 during the German occupation of Paris and never re-opened. The second bookstore is still in operation today. Opened in 1951 by American George Whitman, it was originally called “Le Mistral,” but was renamed to “Shakespeare and Company” in 1964 in tribute to Sylvia Beach’s store and on the 400th anniversary of William Shakespeare’s birth. 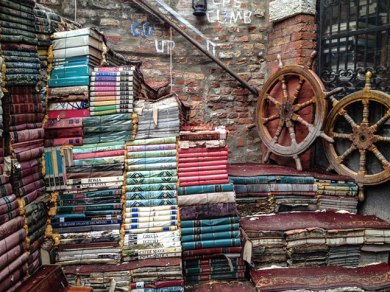 Venice’s unique bookstore is spread out through various rambling rooms; one room with a gondola stacked with books, other rooms are packed with rowing boats & bath tubs full of old second hand atlases, dictionaries, art books, biographies and history books. There’s something for every one, you just have to look long enough. 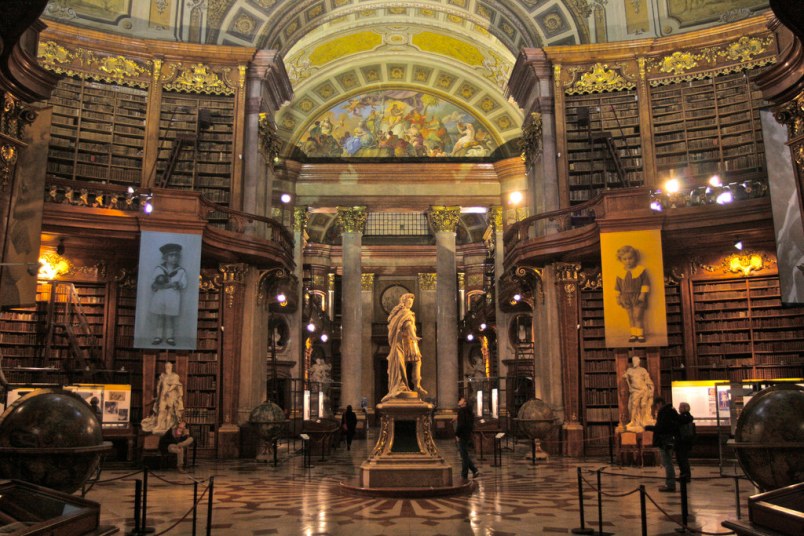 The Austrian National Library is the largest library in Austria, with more than 12 million items in its various collections. And side note *omg how pretty is it?! it looks like a church or something!

Carusel Carousel is an experimental cultural experience of the old center, providing space for reading, socializing and artistic exploration of the heart of the city. With a top-floor bistro, a media space in the basement and a gallery dedicated to contemporary art on the first floor, the bookstore prepares to tell a new story on a street with a vibrant commercial tradition.

Arguably the world’s most beautiful bookstore, with neo-Gothic architecture incorporating stained glass, a sweeping staircase and a plaster ceiling imitating wood. It’s become so popular with tourists, in July 2015 the store started charging entrance fees. It was also a favourite of J.K. Rowlings when she lived in the city/ 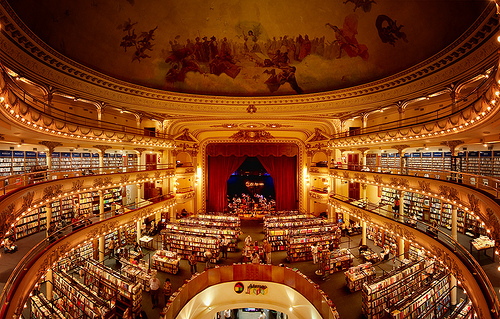 Converted into a cinema in 1929, the building that houses El Ateneo underwent its most recent rebirth into a bookstore in the early 2000s. Stunningly photogenic and vast, the majestic former theater retains its century-old ornate architecture and decor befitting the capital of Argentina. The stage and theater boxes have been converted into reading spaces.

Back in the 1920s, six blocks of Manhattan’s Fourth Avenue were known as “Book Row.” Of the 48 bookstores that gave the district its name, Strand is the only survivor. After moving to its current location on Broadway and 12th Street, the beloved NYC store built up a staggering catalog that now includes 2.5 million new, used and rare books. The coolest section is the Rare Book Room.

What about you guys? what destinations are on your bookish bucket list? let me know in the comments.