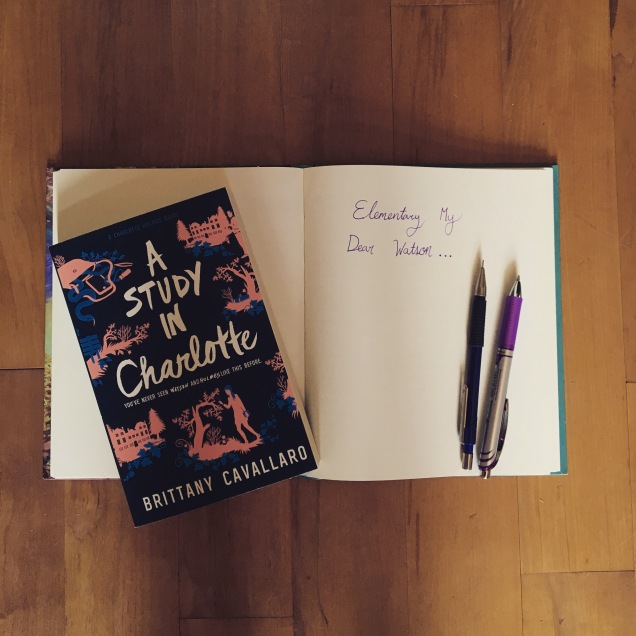 A Study in Charlotte

Synopsis: The last thing Jamie Watson wants is a rugby scholarship to Sherringford, a Connecticut prep school just an hour away from his estranged father. But that’s not the only complication: Sherringford is also home to Charlotte Holmes, the famous detective’s great-great-great-granddaughter, who has inherited not only Sherlock’s genius but also his volatile temperament. From everything Jamie has heard about Charlotte, it seems safer to admire her from afar.

From the moment they meet, there’s a tense energy between them, and they seem more destined to be rivals than anything else. But when a Sherringford student dies under suspicious circumstances, ripped straight from the most terrifying of the Sherlock Holmes stories, Jamie can no longer afford to keep his distance. Jamie and Charlotte are being framed for murder, and only Charlotte can clear their names. But danger is mounting and nowhere is safe—and the only people they can trust are each other.

The first section of this review will be spoiler free

I am a big fan of the BBC show Sherlock, and though I have never actually read Arthur Conan Doyle’s original stories I thoroughly enjoy the retellings. When I saw this book I was intrigued, it wasn’t a simple re-telling but a new Sherlock and Watson story based on the descendants of the famous duo. Jamie Watson was an interesting narrator, he is of course very reminiscent of his famous ancestor but with his own twist. Charlotte is just as infuriating and complicated as Sherlock, but she clearly cares for Jamie and it was nice to see their partnership grow and evolve throughout the book, I am sure in the rest of the series their dynamic will continue to evolve. The mystery itself was very engaging, a murder and a murder with a vendetta against Holmes and Watson made for very interesting suspense. I didn’t figure out who was behind it until almost the end of the book.

The rest of the character other than Watson and Holmes were not very well developed. This didn’t impact the overall story too much but it would have been nice to get a bit more depth for characters like Jamie’s dad or Charlotte’s roommate. I also found Jamie’s fixation on Holmes slightly annoying from time to time, like he needed to realize he was a valuable asset to the case too!

If you are looking for a fun mystery with strong threads to Sherlock Holmes this is the book for you. I will say as a warning there is some dark content in this book, like rape and drug use, so if any of those are a trigger for you you may want to steer clear.

The biggest spoiler is obviously who was the killer? I begun to suspect Nurse Bryony shortly after the halfway mark, and my instincts proved to be true. I didn’t quite guess that she was August Moriarty’s fiancé out for revenge against Charlotte for ruining her life and his. I will also say that I am not sure I want there to be a romance between Jamie and Charlotte, I like them being best friends and the romance aspect felt a bit forced, but I guess we will just have to wait and see.

What is your favourite Sherlock Holmes re-telling?

13 thoughts on “Review: A Study in Charlotte”

Looking for the perfect book for the first day of Fall? The Nature of Witches is a beautiful story about witches who can control the weather and their battle against a changing climate. It’s got an incredibly unique magic system and a heartfelt message.
A little peak at my reading nook, I usually read just about anywhere but I like having a designated reading chair!
It’s a wonderfully rainy day here and all I want to do is curl up with a tea and a fuzzy blanket and read all day!
Already running out of space in my bookshelves! What are your best book storing hacks that don’t involve buying a new shelf? I could use suggestions!
Just started The Poppy War and I am so excited! I have heard so many great things about this books, and the cover is gorgeous so we’re off to an excellent start!
Some of my favourite dark academia book perfect for those rainy fall days ahead!
Loading Comments...
%d bloggers like this: