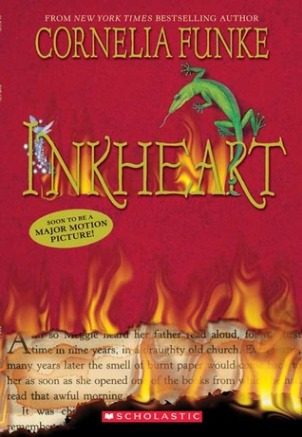 Synopsis: Twelve-year-old Meggie learns that her father, who repairs and binds books for a living, can “read” fictional characters to life when one of those characters abducts them and tries to force him into service.

Characters from books literally leap off the page in this engrossing fantasy. Meggie has had her father to herself since her mother went away when she was young. Mo taught her to read when she was five, and the two share a mutual love of books. He can “read” characters out of books. When she was three, he read aloud from a book called Inkheart and released characters into the real world. At the same time, Meggie’s mother disappeared into the story. This “story within a story” will delight not just fantasy fans, but all readers who like an exciting plot with larger-than-life characters.

The first section of this review will be spoiler free

This was one of my favourite books growing up, especially since it is originally written in German, and reading it was a fun way for me to practice. Recently I was searching the internet for a movie to watch and I saw the Inkheart movie, it reminded me about how much I loved the book and I thought it was high time I do a review of it. At it’s core this is about the love of books, and I think that is what appealed to me so much. Also, the ability to read myself into books is something I would definitely want. The world building is good, but not too important as the story (at least in this first book) takes place in our world.

The character development is the really important element of this story and it is done very well. Meggie is a dynamic character and we discover the mysteries of her life right alongside her. Mo and Dustfinger are also well developed and complete with their own sad backstories. The great villain of the story, Capricorn, is also an interesting character. I could sympathize with his situation of being pulled out of the world he knew (inside the boo Inkheart) and dropped into the confusing world of modern day Europe. His villainy had understandable roots which made him all the more dynamic.

The first time I read this book I didn’t even realize I was reading a translation, which I think speaks to the quality of the story. Of course once I read it in the original German I realized that it was even better, because some things just don’t translate well. But if you can’t read German no worries, the book is great in any language. I don’t think as a kid I ever finished the series but I definitely would continue it today, it is a book that is good for both children and older audiences, with its rich magic and complex character dynamics.

I am not going to do a spoiler section for this review, mostly because there aren’t any major ones and so the few that are there need to remain hidden for now (we have got to keep some mysteries a mystery).

Have you read Inkheart? Are there any childhood books you have recently rediscovered? let me know in the comments.

Looking for the perfect read for spooky season? The Devil Makes three is a chilling dark academia about two students, Tess and Eliot, who open a book they shouldn’t releasing a devil from its pages. This book gripped me from the first page, and I definitely needed to read it with all my lights on!
Meant to post this yesterday but well I guess the internet had other ideas! This is my September reading wrap up:
I hot some exciting mail today! A big thank you to @hccfrenzy for sending me these ARCs! I absolutely cannot wait to read them and those covers are amazing
Looking for the perfect book for the first day of Fall? The Nature of Witches is a beautiful story about witches who can control the weather and their battle against a changing climate. It’s got an incredibly unique magic system and a heartfelt message.
A little peak at my reading nook, I usually read just about anywhere but I like having a designated reading chair!
It’s a wonderfully rainy day here and all I want to do is curl up with a tea and a fuzzy blanket and read all day!
Loading Comments...
%d bloggers like this: