Happy first of the month everyone! Can you believe it’s already March? I sure can’t. I thought I would start doing a TBR at the start of every month to share my reading goals with all of you. I have seen this on a couple of different blogs and it is always so fun to see what other people are excited about reading.

My TBR for this month is rather shorter than normal as my school work is increasing this month as well, ending up to exams.

The Hazel Wood By: Melissa Albert 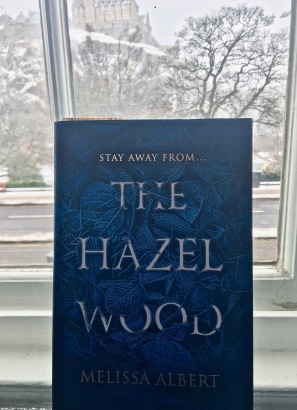 Seventeen-year-old Alice and her mother have spent most of Alice’s life on the road, always a step ahead of the uncanny bad luck biting at their heels. But when Alice’s grandmother, the reclusive author of a cult-classic book of pitch-dark fairy tales, dies alone on her estate, the Hazel Wood, Alice learns how bad her luck can really get: her mother is stolen away―by a figure who claims to come from the Hinterland, the cruel supernatural world where her grandmother’s stories are set. Alice’s only lead is the message her mother left behind: “Stay away from the Hazel Wood.”

Alice has long steered clear of her grandmother’s cultish fans. But now she has no choice but to ally with classmate Ellery Finch, a Hinterland superfan who may have his own reasons for wanting to help her. To retrieve her mother, Alice must venture first to the Hazel Wood, then into the world where her grandmother’s tales began―and where she might find out how her own story went so wrong.

The Dazzling Heights By: Katharine McGee

New York City, 2118. Manhattan is home to a thousand-story supertower, a breathtaking marvel that touches the sky. But amid high-tech luxury and futuristic glamour, five teenagers are keeping dangerous secrets… Leda is haunted by memories of what happened on the worst night of her life. She’ll do anything to make sure the truth stays hidden—even if it means trusting her enemy.
Watt just wants to put everything behind him…until Leda forces him to start hacking again. Will he do what it takes to be free of her for good?

When Rylin wins a scholarship to an upper-floor school, her life transforms overnight. But being there also means seeing the boy whose heart she broke, and who broke hers in return. Avery is tormented by her love for the one person in the world she can never have. She’s desperate to be with him…no matter the cost.
And then there’s Calliope, the mysterious, bohemian beauty who arrives in New York determined to cause a stir. And she knows exactly where to begin.

But unbeknownst to them all, someone is watching their every move, someone with revenge in mind. After all, in a world of such dazzling heights, just one wrong step can mean a devastating fall

Geek girl Elle Wittimer lives and breathes Starfield, the classic science-fiction series she grew up watching with her late father. So when she sees a cosplay contest for a new Starfield movie, she has to enter. The prize? An invitation to the ExcelsiCon Cosplay Ball and a meet-and-greet with the actor slated to play Federation Prince Carmindor in the reboot. With savings from her gig at the Magic Pumpkin food truck and her dad’s old costume, Elle’s determined to win – unless her stepsisters get there first.

Teen actor Darien Freeman used to live for cons – before he was famous. Now they’re nothing but autographs and awkward meet-and-greets. Playing Carmindor is all he has ever wanted, but Starfield fandom has written him off as just another dumb heartthrob. As ExcelsiCon draws near, Darien feels more and more like a fake – until he meets a girl who shows him otherwise. But when she disappears at midnight, will he ever be able to find her again?

And extra book that I really want to read but that may have to be pushed to next month:

The Renegades are a syndicate of prodigies — humans with extraordinary abilities — who emerged from the ruins of a crumbled society and established peace and order where chaos reigned. As champions of justice, they remain a symbol of hope and courage to everyone… except the villains they once overthrew.

Nova has a reason to hate the Renegades, and she is on a mission for vengeance. As she gets closer to her target, she meets Adrian, a Renegade boy who believes in justice — and in Nova. But Nova’s allegiance is to a villain who has the power to end them both.

It is always so hard to narrow down the amount of books I can buy every month, if I had unlimited money I would be buying hundreds.

What’s on your March TBR?